I heard about microplastics for the first time a couple of years ago. Someone was talking about those skin cleansers for acne with microbeads. Do you know them? Yikes.

Little did I know back then that the word “microplastics” would be everywhere just a year or so later.

Today we all read news about microplastics being found in our oceans, in salt, in food, in rainwater, and even in Arctic snow!

Check this out: we’ve been using plastic since the 1950s. Not that long ago, right? But since then we have generated approximately 8.3 billion metric tons of plastic.

Math and numbers are not my forte but…

Obviously, all that plastic has to go somewhere once we throw it away. Plastics don’t biodegrade, they are not going to ‘melt’ into the soil like a banana peel.

As the word implies, microplastics are tiny pieces of plastic less than 5 millimeters long.

There are two types: 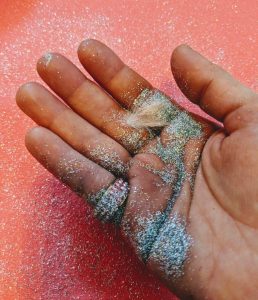 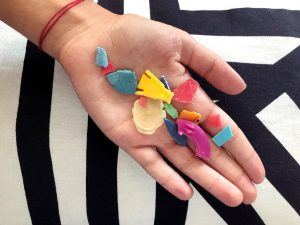 Oh, many of these microplastics are actually fibers, which makes researchers think that they come from the production, use, and disposal of synthetic clothing.

Approx. 60% of the clothes used nowadays are synthetic. So imagine the number of microfibers floating around.

Now, did you know that washing your synthetic garments pollutes A LOT? Just one load of 6 kg of synthetic laundry releases between 100,000 and 700,000 particles of tiny fibers.

And where do microplastics live?

Hmmm… I don’t want to be a Debbie Downer.

But microplastics are literally everywhere.

They have been found in our food, our water, and our air. They live inside of us. Ew.

Of course, microplastic concentration in food, water, and air changes depending on the geographical area you live in, but this affects all of us to some extent.

Because even fish living as deep as 1,000 ft (around 300 m) deep in the ocean are ingesting these microplastics. The researchers who found this say that there were mostly PET plastics in the guts of different kinds of fish, from bottle caps to plastic bags and, again, synthetic clothing fibers.

There may be around 5.25 trillion pieces of macro and microplastic floating in the open ocean, which would weigh up to 269,000 tons.

And have you heard about the plastic particles found inside the Arctic snow?

What does it mean for human health?

This phenomenon is way too new to know all the impacts it will have on our lives.

But there are theories.

First of all, plastic is obviously toxic, and once in our gut it will release toxic substances and cause disorders such as cancer, endocrine disruptions, and infertility.

We don’t quite know what effects microplastics have when they enter our bloodstream, and even what happens (or will happen) when they reach our brains in large amounts.

What is sure is that harmful bacteria and chemical toxins can live in microplastics. One research conducted in Singapore found more than 400 different types of bacteria on 275 particles of microplastic. AND we are eating these things!

This is how we can make microplastics disappear

You know there’s a solution for everything.

We will leave to science the whole thing about how to get rid of the existing microplastics – and in the long run, they will have to deal as well with our quasi bionic half-human-half-plastic bodies. But don’t feel hopeless, like always there is something you can do!

And in this case, it is pretty simple: reduce your waste, and reduce your use of single-use plastics.

And if you need some ideas to get started, visit my post on how to reduce your waste on a budget. 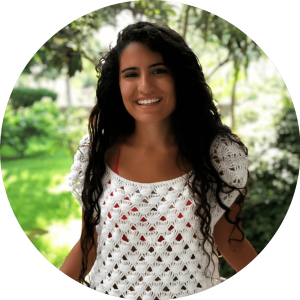 Hey there! I’m Lidia and this is Pretty Green Lily. This blog is my personal journey towards a more sustainable life. I want to show you that being pretty green is possible for everyone – and easier than you might think. I hope you’ll join me!

I work very very hard to bring you all this content. If you donate a couple of dollars, you'll be helping me make more and better posts <3

Any cookies that may not be particularly necessary for the website to function and is used specifically to collect user personal data via analytics, ads, other embedded contents are termed as non-necessary cookies. It is mandatory to procure user consent prior to running these cookies on your website.